In Piazza delle Erbe, Palazzo Maffei presents itself with its magnificent Baroque façade, a theatrical backdrop that holds a unique history. 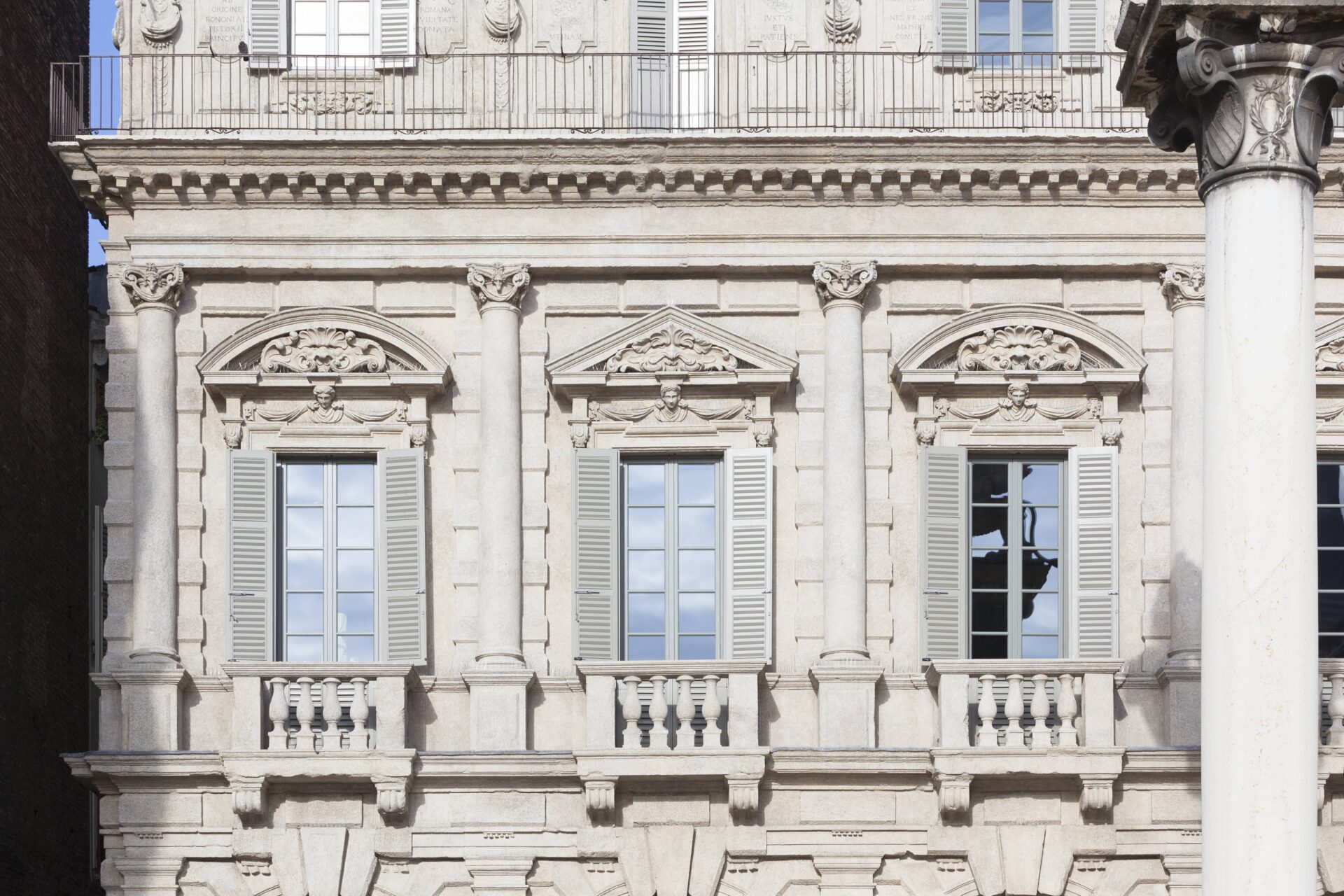 Palazzo Maffei’s magnificent Baroque façade closes the north-west end of Piazza delle Erbe. The oldest part of the building was built in the late Middle Ages in the area of the Capitolium, the religious complex dedicated to the Capitoline Triad and built during the Republican era, when Verona became a Roman Municipium (49 BCE). Its perfectly preserved foundations are still visible today. Corso S. Anastasia opens to its right while Corso Porta Borsari, the ancient Roman Decumanus Maximus, passes to the left.

The building we admire today is the fruit of extensive expansion work carried out in the seventeenth century by the bankers Marcantonio and Rolandino Maffei, whose money changing business was located adjacent to Piazza delle Erbe, then also known as Piazza Grande. Historical documents show that the work began in or around 1626, the year in which nephew and uncle submitted a petition to the municipal council requesting authorisation for renovation work on their home, which was evidently in rather poor condition.

The Maffei appealed to the need to improve the decorum of the piazza, citing ‘the merits of the site’ and also to the requests by their fellow Veronesi, ‘the owners of the workshops’, who requested urgent action to improve the appearance of the building, given its stately location. The petition reveals the Maffei’s desire to rework the façade, decorating it according to the tastes of the times and adding an upper floor. We do not know the name of the architect who was commissioned to redesign the palazzo with certainty. However, we have every reason to trust the words of Scipione Maffei, the great Veronese scholar and reformer. In spite of the fact that he belonged to a different branch of the family, he was quite familiar with the history of the family who owned the palazzo and records that the design for the dwelling had ‘come from Rome’. This is entirely probable, given the relationship between the Maffei and Rome.

In any case, most of the work was completed in 1668, as recorded in a wall plaque in the courtyard, by Rolandino, who extended the façade outward, decorating it with statues, pilaster strips, and capitals. He also embellished the top with a full-width terrace accommodating a hanging garden, and a citrus grove, described in 1714 by the naturalist Johann Christoph Volkamer in the engravings in his album Continuation der Nurbergischen Hesperidum. Observing the palazzo, one immediately grasps the importance of the family, magnificently represented by the austere and elegant majesty of the façade, which alternates late-Renaissance architectonic motifs with Baroque flights of fancy.

The building consists of three floors, the upper two rising above the five arches of a false portico. Since Medieval times, the ground floor was occupied by the workshops of artisans. In the reworked seventeenth-century palazzo, they gave onto the piazza from a façade of arches alternating with engaged Doric columns and faux-bugnato. The first floor façade is richer architecturally, characterised by a sequence of five large French windows surmounted by alternating peaked and rounded pediments with mascarons separated by engaged ionic columns. Each window has a small balcony with balustrade overlooking the piazza.

The second floor—characterised by three nearly square windows alternating with two doors along a running balcony, all separated by engaged columns with floral decorations and surmounted by a finely designed rooftop balustrade—is a stage set for ancient history, with six towering statues, each supported on a corbel: Hercules (sculpted out of a single block of Parian marble obtained from the archaeological excavations beneath the palazzo), Jove, Venus, Mercury, Apollo, and Minerva.

Viewed in stunning perspective from the piazza below, these prominent statues instil a sense of vertigo and transform the palazzo into a grand theatre backdrop. The interior maintains the same sumptuous tenor. After passing through the entrance archway, you discover two separate building units sharing two communicating rectangular courtyards. These are encircled by the large windows of the piano nobile (first floor), which open onto a running balcony with an iron railing. Scipione Maffei described the structural marvel of the magnificent spiral staircase as being ‘fully airborne’, rising from the cellar to the roof and crowned by a large lantern and statues, defying the laws of gravity and ‘supporting itself all on its own’.

The piano nobile, where the Carlon collection is now exhibited, still features traces of a cycle of classical-themed frescoes in the entry hall and in the grand salon giving onto Piazza delle Erbe. In all probability, they date to the 18th and 19th centuries. A number of beautiful rooms overlooking the second courtyard still reflect the original layout of the spacious living quarters. They are embellished by noteworthy architectural elements, such as the floral stuccowork framing oval panels with mannered paintings on canvas, datable to the late 18th century, or the fireplace in locally quarried black marble in the room giving onto a side street…